The Thorn in Ozzie’s Side

With the White Sox acquiring Adam Dunn this past off-season and retaining captain Paul Konerko, the offense was expected to be one of the most dynamic in the league. In addition to rebound efforts thus far by Gordon Beckham and Carlos Quentin, the Sox’s offense has the ability to put up runs at a prolific rate as indicated by the 5.75 runs per game they’ve posted through the first 12 contests. That even includes two 1-run performances. To put that in to perspective, the Yankees’ offense last year led the Majors with a 5.3 runs per game clip. So it seems safe to say that the offense is doing a very good job putting the team in position to win. 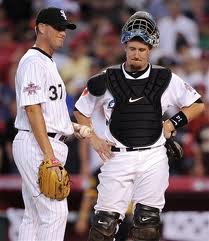 As for the pitching staff, you really can’t go wrong with starting any one member of their starting five. Mark Buehrle, John Danks, Gavin Floyd, Edwin Jackson or Jake Peavy (recovering from a detached back muscle?) is a very solid, if not outstanding rotation that deserves a lot more recognition outside of Chicago’s city limits. But giving up 4.9 runs a game doesn’t sound like a number this staff would produce. That’s because it isn’t. Upon further investigation, the rotation has only given up 2.8 runs a game in addition to averaging 6.5 innings a start. That means that the combination of Buehrle, Danks, Floyd, Jackson, and a start by Phil Humber are producing a quality start most of the time.

So what happened to the other 2.1 runs that somehow got shaved off the original 4.9?

Matt Thornton has been especially god awful after claiming the closer role in spring training. His 3.21 whip is three times what you expect from your closer. But the problem is that he isn’t the only problem. Chris Sale, who many felt should have been the closer or even in the rotation is tied with Will Ohman for the most runs given up out of the bullpen. Throw in Tony Pena’s five runs and you have a recipe for sure-handed disaster.

The biggest off-season move may not even end up being Konerko’s or Dunn’s deal, it may be letting Bobby Jenks walk. Ozzie will never admit it, but unless Sale or Thornton bounce back and produce, that very well might be the case.

2 responses to “The Thorn in Ozzie’s Side”