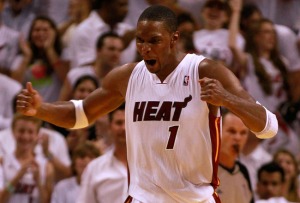 Last Sunday, after the Chicago Bulls had won by a handsome margin against the Miami Heat in Game 1, I boldly stated the Bulls would win in six games, if not five.

Well, congrats to the Heat for making me think twice.

In a season that saw Miami struggle to begin the season, then put together a solid overall campaign the rest of the way, the Heat have appeared to become the three headed monster we all thought they would be back when their talent convened in South Beach for their self-hosted rock concert.

Now don’t get me wrong, I am not a fan of the Heat, nor do I particularly like Chris Bosh or LeBron James, but I do have to admit when I am wrong and give kudos to Miami and Erik Spoelstra for the quick turnaround against the Bulls. They took their defense to another level by forcing Derrick Rose in to a terrible 7-23 performance in Game 2, then continued their dominance in Game 3 as well.

While I think Derrick Rose can bounce back, the Heat are playing all-around team defense and are doing a great job closing off the lane and any penetration by Rose. In addition, the Chicago Bulls are shooting horrendously from outside 18-feet, and Kyle Korver continues to look for his stroke in the series with no avail.

Yet, nothing has surprised me more than the emergence of Chris Bosh in the series. After a dismal 1-18 shooting night against the Bulls in the regular season, Bosh has registered two 30-point efforts to help support Dwayne Wade and James. Joakim Noah and Carlos Boozer just have yet to establish themselves defensively on Bosh.

So basically, the Heat have the edge in the series and have the Bulls on their heels, but this series is far from over.