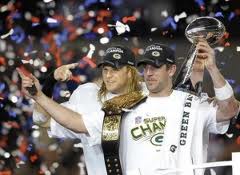 In what should be one of the most riveting games to start an NFL season in history, featuring the previous two super bowl winners, alot will be revealed tonight about the defending champions and their chance of repeating as the best team in the world. The Packers will get back JaMichael Finley and Ryan Grant on offense, while retaining most of their championship defense. For the Saints, it will be interesting to see the impact Mark Ingram has, in addition to who emerges as the top target for Drew Brees. Aaron Rodgers has both more and better targets in his arsenal and will have an adaquate running attack to help his cause in tonight’s game. My prediction, in what should be a wild game, is 35-28 Green Bay comes out on top due to the lack of an explosive backfield for the Saints who will surprisingly miss Reggie Bush.

Peyton Manning being out for the first three months of the season is indeed a big blow for the Colts. BUT, people forget that Kerry Collins as recently as three years ago led the puny Titans to a 12-0 record with far fewer weapons. The analysts who believe this is now a four win team are crazy. Their defense still has Dwight Freeney and Robert Mathis and should bounce back from a lackluster 2010-2011 season. On offense, they re-signed Joseph Addai and return injured Dallas Clark to help surround Kerry Collins in his attempt to come back from his extremely brief retirement. My prediction, Colts go 10-6 while making the playoffs, Manning comes back week 10 and leads the Colts to the Divisional Playoff Round.

Stay tuned for full season predictions from Jackman Sports that will be coming out prior to this Sunday’s slate of game.